The future is now, GNOME Shell is here 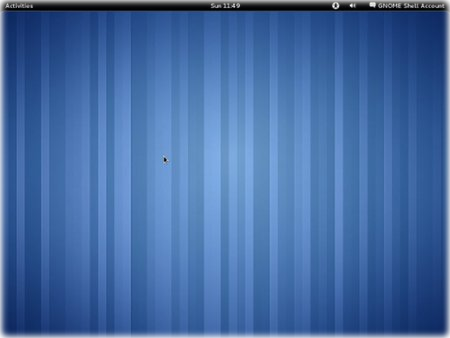 Surely the very first thing you notice when you approach to the GNOME 3 is an empty desktop. Just a wallpaper background, no icons at all and, as you’ll soon discover, no pop-up menu if you right click on the desktop background.

If you’ve ever tried to save some files in the desktop folder (the exact folder name depends from the distribution, sometimes is called Desktop, sometimes is translated in your language like Escritorio, Scrivania or similar names) you could have found that your files won’t be shown in the desktop, like if it’s dead, unusable for everything.

What the GNOME users call desktop is a Nautilus file manager window in the foreground upon the background wallpaper. Nautilus application at startup checks for a preference to determine if a desktop is needed, so we have to change this preference.

To enable the classic desktop behavior you need to execute in a terminal emulator window (in a single line):

This should automatically launch nautilus which will show you the icons and let you the possibility to interact with the desktop, moving its icons, creating new folders and to see the files into the desktop folder.

If you would disable the desktop you will have to execute the command:

Both preferences are permanent and don’t need to be launched after every reboot.

If the icons still won’t show up you could need to start nautilus manually by executing:

In such case you could need to add the previous command in the startup applications to launch automatically after the login. Before adding a new entry in the Startup Applications Preferences dialog check for an entry called Files, that should run the nautilus automatically.

It’s possible to show and hide individual groups of icons on the desktop:

Show and hide the disks volume icons on the desktop

Become a Friend of GNOME

Search in the blog