The future is now, GNOME Shell is here

A modal dialog is a window which, once opened, will not allow the user any interaction with the window below until the dialog is closed.

In GNOME 3 the default modal dialog behavior is to attach the window so both the back and front window will be firmly attached together and dragging one of them will move even the other window, like if they became a single window. 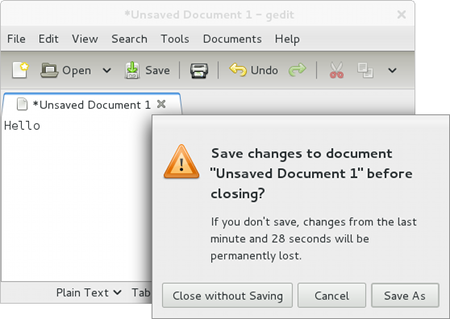 This behavior can be changed to restore the old way the modal dialogs were treated in the previous GNOME releases. To detach the modal dialogs from the main window you will just need to execute the following command (in a single line) inside a terminal window:

To attach the modal dialogs to the parent window you could execute:

After issuing one of the previous commands you’ll need to restart the GNOME Shell by logout the current session.

Show and hide the menu icons

Comments on: "The modal windows behavior" (6)

Become a Friend of GNOME

Search in the blog